How to World Cup: Your Lake Louise Weekend Guide

This November, kick start your ski season with a visit to the Canadian Rockies in Banff National Park. With three ski resorts open, two exciting towns to discover, and a world-class ski event to get hyped up for winter, there’s no shortage of ways to enjoy a weekend with World Cup.

The Audi FIS Ski World Cup hits the Lake Louise Ski Resort stage on their first world tour stop this November. The Lake Louise Audi FIS Ski World Cup is the only event of its kind in Canada and is notorious for its epic early season snow, the proximity fans have with the athletes and the intimacy of the hamlet of Lake Louise, nestled pristinely in Banff National Park. It’s one of the select few on the World Cup circuit to hold both the men’s and women’s downhill and super-G races. There is no other experience quite like it and it is the place to watch the world’s fastest ski racers.

Here’s everything you need to know to make the most of a weekend with World Cup.

Throughout both World Cup weekends, free events will be hosted for all ages to enjoy. Like the ‘Learn To’ day on December 1st! Explore snowshoeing with Parks Canada, learn more about sit skiing (and try it for yourself!) and take advantage of free lessons on both December 1st and December 8th. On all race days, take the family to the Kids Zone near the finish area! This spot is open to all ages and includes large scale games and marshmallow firepits to enjoy, and an athlete autograph zone!

2. Get the VIP Experience

With the purchase of a VIP Experience, enjoy the private VIP Lounge in the Whiskey Jack Lodge, amongst rustic decor and surrounded by a variety of gourmet mountain-fare stations featuring the restaurants of Lake Louise Ski Resort. Guests will enjoy a dine-around brunch while Willow Park Wines & Spirits share bubbles and beverages. You’ll also receive exclusive access to the VIP Zone & Preferred Viewing in the Finish Area and be as close as it gets to the races and the athletes.

3. Take in the Festival Vibe

Throughout both weekends, the base areas comes alive with a festival vibe to be enjoyed by skiers and visitors alike. Alpine Canada, the governing body for alpine, para-alpine and ski cross racing in Canada, celebrates 100 years of ski racing history on November 30th at Kokanee Kabin. Enjoy food, drinks and a live DJ! The following weekend, take in craft beer and spirits, activities, and games from the Kokanee Kabin deck at the Parka Patio Party – the perfect place to watch racers cross the finish line!

While accommodation options will likely be fully booked in Lake Louise throughout both World Cup weekends, lodging availabilty in Banff is sure to be open. Talk to our in-destination Reservations Team for some great options to suit your style and budget – from condo to castle to cabin, and everything in between. Day time shuttles between several downtown Banff locations and all three ski resorts will ensure you can take in every last minute of the ski race action.

Come out and cheer on the top Super-G athletes as they pick their starting bib for the December 1st and December 8th Super-G races. These two bib draw events are fun evenings where ski racing fans can meet the FIS Alpine athletes, mingle with family and friends of ski racing, and enjoy the celebratory atmosphere of the Fairmont Chateau Lake Louise. With limited accommodation available in Lake Louise, personal transportation back to Banff must be arranged as there are no evening shuttles.

6. Level Up Your Ski Technique

After watching the athletes in action, why not take that inspiration back to the slopes for yourself? Lake Louise Ski Resort is sure to have several beginner and intermediate groomed runs open by World Cup, perfect for practicing your ski technique. Have kids in a free lesson on December 1st? Take this as a perfect opportunity to book an adult lesson for yourself! It’s never too late to learn.

Snow flies early here in the Canadian Rockies, which means all three resorts will have been open for several weeks by World Cup. Make it a complete weekend by visiting all three resorts – Banff Sunshine Village, Lake Louise Ski Resort, and Mt. Norquay – each with their own distinct terrain and mountain vibe. If you do visit all three over the duration of your stay, you have officially completed the SkiBig3 Trifecta Challenge!

Be sure to share your success on social media with the #SkiBig3Trifecta hashtag. Head to the SkiBig3 Adventure Hub on Banff Avenue with your lift ticket to redeem an exclusive prize and voucher for a complimentary beer at the Elk and Oarsman (just across the street!)

Ready to join the pros and get in on the World Cup action for yourself? Check out our featured ski and stay vacation packages or call our Vacation Specialists at 1-844-236-7829. 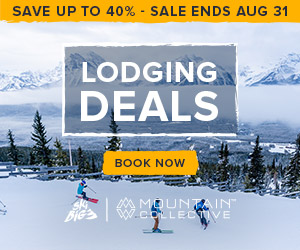 Warm Up To Winter With Five Bow Valley Fitness ClassesUncategorized

All SkiBig3 Resorts Open for 2019/20 SeasonUncategorized